What is Point Spread Betting? How Does It Work?

What is a point spread?

A point spread, or simply “the spread”, is a sports betting number made by oddsmakers at sportsbooks that serves as a handicap between two opponents. Because not all teams are equal in skill, oddsmakers use spread betting to level the playing field.

The point spread is quickly becoming part of the mainstream sports conversation, used in sports betting as the great equalizer when it comes to comparing teams. It’s most often used in NFL and college football betting, as well as NBA and NCAA basketball. In baseball, the spread is called the run line and in hockey, it is called the puck line. 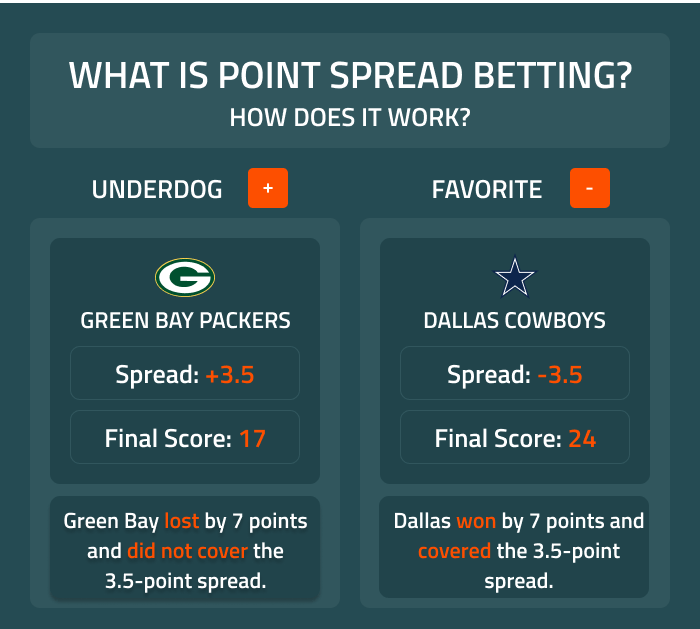 How to read a point spread

Let’s look at the point spread from Super Bowl LIV as an example of how to read a point spread.

Kansas City was a 1.5-point favorite to win the Super Bowl. This means they needed to win by two or more points to cover the spread. San Francisco was a 1.5-point underdog. They could have lost by 1 point (or won the game outright) and still covered the spread.

Kansas City ended up winning the Super Bowl 31-20. The 11-point margin of victory was greater than the -1.5-point spread, meaning they covered the spread.

How to bet against the point spread

Before making a point spread bet, you’ll need to decide who you think will cover the spread and if you should make the bet now or later — because the spread might change. Then you’ll want to understand the vig/juice on the spread and how much you stand to win.

Which team will cover the spread?

Why does the point spread change?

The point spread, like all sports betting markets, is an active market. Oddsmakers can and will move the spread based on a number of factors, including:

You also need to understand how odds work in point spread betting. In the above Super Bowl example, you’ll notice a -110 next to both spreads (assuming you’re using American odds). This is called the vig (short for vigorish) or the juice. It is a price that the sportsbooks charge to bet into this market and is similar to the rake in poker. With a vig of -110, you’ll need to wager $110 to win $100.

How much can I win?

The amount of money you can win from point spread betting depends on two things:

Use our betting calculator to find out exactly how much you can win based on different odds and different wager amounts.

How is a point spread determined?

The biggest factor that oddsmakers look at when making a point spread is the difference in skill level between the two teams. Most oddsmakers will have their own set of power rankings that will help determine the spread for each game.

There are other factors that come into play as well, including:

The point spread in baseball odds is often referred to as the run line. In MLB, the run line is almost always set at 1.5, meaning the favorite needs to win by two or more runs.

The Washington Nationals (+1.5) were the underdog with a price of -185, meaning it took a $185 bet to win $100 for Washington run line bettors. The Nationals won the game outright, so they covered the run line, but it also could have lost by one run and still covered.

Learn more about betting on the run line

The point spread in hockey odds is often referred to as the puck line. In the NHL, the puck line is almost always set at 1.5, meaning the favorite needs to win by two or more goals.

Learn more about betting on the puck line

What is a push in point spread betting?

When a point spread ends in a tie it is called a push. It happens when the spread that you bet against finishes as the exact margin of victory (for example, you bet New England -7 and they win by exactly 7 points).

What does PK or pick 'em mean?

PK or pick ‘em means that there isn’t a spread because the teams are so evenly matched. Whichever team you pick simply needs to win the game outright.

Can you bet on point spreads for a half or a quarter?

Yes, most sportsbooks will offer point spread lines for each quarter and the half in football and basketball.

Which sports use point spreads?

Point spread betting is most common in football and basketball. It is also used in baseball (run line) and hockey (puck line). Sportsbooks are also starting to use the spread in other sports such as golf and tennis to diversify their offerings.

Thank you for your feedback 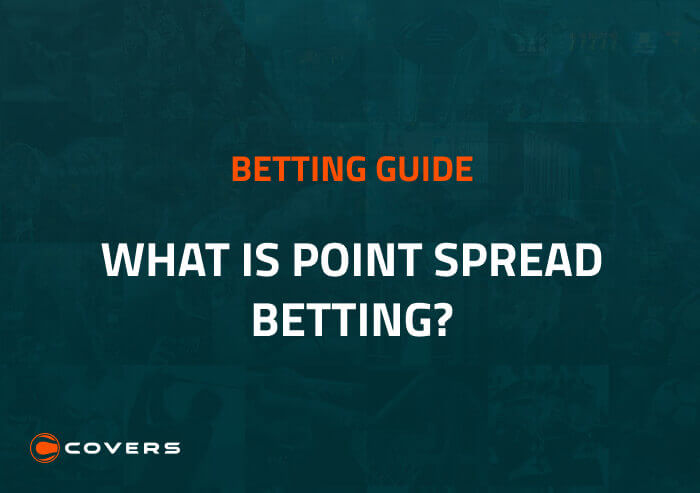 What is Point Spread Betting? How Does It Work?
Provided by

Betting Guide
Betting Tools
Get the best sports betting information delivered straight to your inbox for free.
About Us
Contact Us
Careers
Our Team
Our Community