Nov 6, 2016 |
By: Covers Staff
If you're still on the fence about who to back in this primetime matchup we've enlisted the help of expert NFL bloggers DJ Eberle, a Bills blogger for BuffaLowDown, and Mark Lathrop, of Seahawks blog Field Gulls. They strap on the pads and debate which team will not only win, but cover the spread on Monday Night Football.

WHY THE BILLS WILL COVER

DJ Eberle is a contributer for Bills' blog BuffaLowDown and writer for The Times Leader. You can follow him on Twitter @ByDJEberle and the blog @BuffaLowDown.

Bills have defense to shut down Seahawks

Believe it or not, Rex Ryan is having a good season defensively. Last week was more of an aberration than a true picture of the Buffalo defense. Tom Brady can light anybody up. With a banged-up Russell Wilson and an uneasy running game, the Bills have the talent to keep the Seahawks in the teens.

All signs point to LeSean McCoy being full go Monday night, and when McCoy is healthy, the Bills are a much better team. When healthy, there hasn't been a defensive unit that's been able to stop McCoy yet. Even if a defense stops McCoy on the ground, he's a threat in the passing game as well. He'll also take some of the pressure off of Tyrod Taylor and the Bills' pass catchers.

Whether or not the Bills are able to pull off the upset Monday night remains to be seen. However, covering the spread shouldn't be too difficult. The Bills are a seven-point underdog, as of Friday night, and in a low-scoring matchup, like many expect Monday's game to be, it will be tough for a lackluster Seattle offense to build lead larger than seven points. It's just too much to ask for Seahawks considering the Bills have shown the ability to score quick points this season.

WHY THE SEAHAWKS WILL COVER

Mark Lathrop is a contributor for Seahawks blog Field Gulls and also writes for sportsbookreview.com. You can follow him on Twitter @mlathrop3 and the blog @FieldGulls.

They finally ditch the run

Seattle is struggling to get their running game going this year with the absence of Marshawn Lynch and Thomas Rawls out injured, ranking 28th in the league at 81.4 yards per game. With Rawls out for another few weeks, the Seahawks will need to look at ditching their rushing attack to become a pass first team. Good thing they have the tools to do that, with Jimmy Graham, Doug Baldwin, Tyler Lockett, and newcomer C.J. Prosise all dangerous targets for Russell Wilson. Of this group, Prosise is the most intriguing. The 3rd rounder out of Notre Dame put up 103 all-purpose yards last week versus the Saints, and rumor has it he is line for many more touches this week in lieu of Christine Michael.

The defense gets off the field on 3rd down

While the Seattle defense was definitely tired last week after their overtime tie at Arizona, they did a poor job of getting off the field on 3rd down against the Saints, allowing New Orleans to convert 9 of 15 chances. Some were legit, some were due to stupid penalties. I am expecting that the home crowd on Monday night will help mightily in this regard, and the time of possession disadvantage Seattle has had over the last few weeks to start evening out. After all, this is still one of the youngest and most talented defensive units in the NFL. The extra day of rest until Monday night will help immensely.

The offensive line gets Fant-astic

It’s become a yearly tradition for Seahawks fans to rip offensive line coach Tom Cable and the offensive line for not protecting Russell Wilson, the franchises’ savior. But eventually Cable and Pete Carroll get the ingredients right and the offense starts to click. At least since 2012 anyway. Last week, in an event right out of a Michael Lewis novel, George Fant got his first start at left tackle since middle school – in the NFL. I’ll admit that the big man is raw, but man does he look like an elite talent 60% of the time. Look for Fant and the rest of the O-Line to give Russell Wilson some more time to find open receivers against a hyper-aggressive Bills defense prone to errors. Another week of healing for Russell Wilson will only help his mobility too. 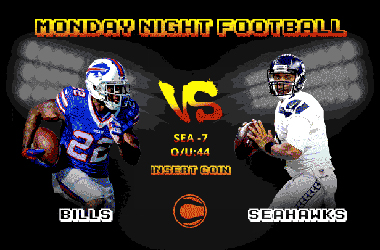 Bills at Seahawks? NFL bloggers debate who will cover Monday night
Provided by