Smart money on the Bears for Saturday's NFL action

Week 15 of the NFL season is the first one in which we get Saturday games, with two matchups on the docket. Covers checks in on the action and line movement, with insights from Jeff Stoneback, director of trading for MGM Resorts sportsbooks in Las Vegas, and Scott Cooley, odds consultant for offshore sportsbook Bookmaker.eu.

“Sharp money is on the Bears, but the public’s betting the Lions,” Stoneback said this morning from his home base at The Mirage on the Vegas Strip. “Straight bets are about 4/1 on the Bears, but we’ve got about that much on parlays and teasers on the Lions. We’d like to have the sharps win on the Bears, to kill the parlays later.”

The line was at Detroit -4.5 the past two days, but went straight to 5.5 earlier today.

Bookmaker.eu opened the Lions -7, and the line has been at 5 since Thursday.

“Smart money is on the Bears right now, as we’ve dropped the spread 2 points,” Cooley said. “The Lions aren’t exactly a sexy public team, while Chicago always has its public backers, so we’ve definitely got some liability on the ‘dog here. Currently, we have more than 70 percent of the money on the Bears.”

Kansas City made a mess of its season after a 5-0 SU and ATS, but still controls its postseason fortunes. The Chiefs (7-6 SU and ATS) beat Oakland 26-15 as a 4.5-point home chalk last week to snap a four-game SU and ATS purge.

“Surprisingly, that game is pretty much split evenly,” Stoneback said of pointspread betting at MGM books. “We’ve got an extra $10,000 more on the Chiefs than the Chargers, and ticket count is almost equal. Good two-way action on that game and on the total. There’s only $200 more on the over than on the under.”

Bookmaker.eu opened the Chiefs -1 on Sunday and flipped to Chargers -2 by Monday afternoon.

“We had a big swing in the late game, as we immediately took sharp action on L.A.,” Cooley said. “We were as high as Chargers -2, but recently received some respected Chiefs money, so the spread has come back a point. We’re 50/50 on (pointspread) tickets, but the Chargers still have a majority of the handle. This might close at a pick ‘em.”

Cooley said the over has also seen some sharp activity. The total opened at 46 and got to 45 early in the week, but is now at 47. 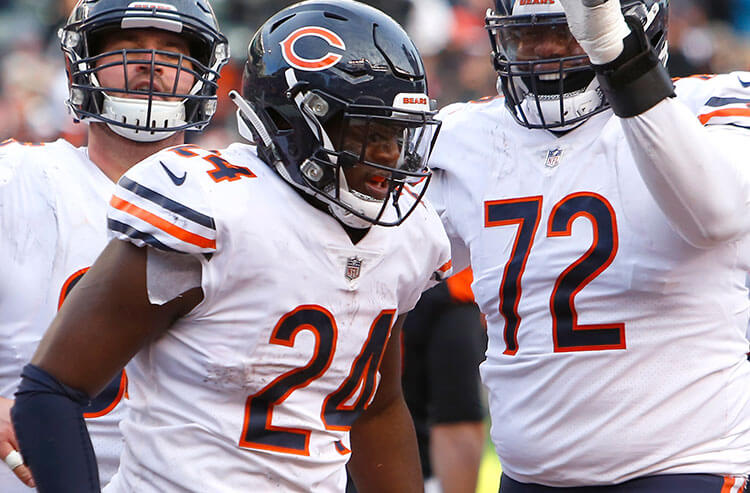 Smart money on the Bears for Saturday's NFL action
Provided by